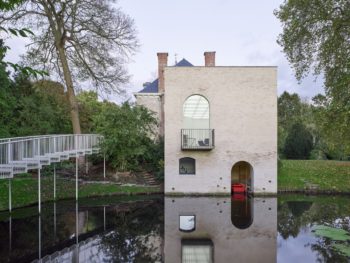 Wim Goes Architectuur was established in 1999 by Wim Goes (°1969). Throughout the years the office has dealt with a wide-ranging number of projects and de-sign issues challenging the scope and essence of architecture itself. Their work has been widely published and awarded in Belgium as well as internationally. Primarily focussing on architecture, the practice has never re-tained itself from exploring other domains such as furniture and product design.
At a very early stage Wim was confronted with contemporary art. It changed his vision on the position of peo-ple in and towards art and architecture, a position allowing the human presence to complete the art and archi-tectural work. This attitude, being close to Reverse Perspective, is an ongoing investigation both in the office and in academic research since. Wim Goes has been teaching since 2005 at Sint-Lucas School of Science and Arts in Ghent & Brussels in Belgium, later on at KU Leuven Department of Architecture, Ghent & Brussels.
The practice has been awarded amongst others the Belgian Prize for Architecture, the Belgian Award, Archi-tecture Award Province East Flanders, the Award of the Order of Architects (BE) and the Architectural Review Award (UK).